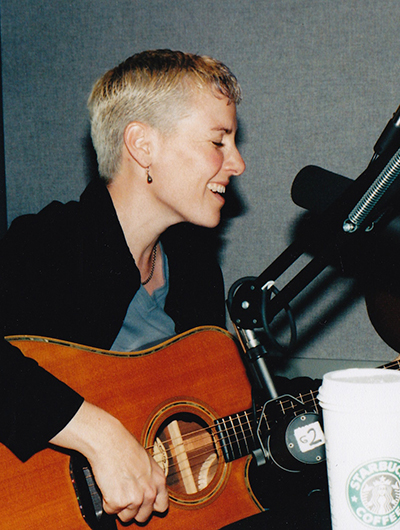 Laura Chandler is an award-winning singer-songwriter and recording artist. Her music has appeared in film and television, including Conde Naste’s acclaimed Lucky magazine commercial, “Cheryl and Me,” which won numerous awards and earned an appearance on ABC television’s The World’s Greatest Commercials.

Laura has released five solo albums, several collaborative albums, and has been included on a number of compilations, including Fast Folk Musical Magazine’s Best of the Bay. Her popular single, “It’s Christmas, Baby!,” was featured on Carzino Entertainment’s Christmas Compilation album, Holiday at the Beach, where she appears alongside veteran artists Michael McDonald, Craig Chaquico, and Ottmar Liebert.

She was also honored by Nashville’s renowned Blue Bird Cafe in a tribute to up-and-coming artists, which eventually led to her inclusion in a popular book on songwriters, Looking For Number One. Her musical collaboration with Chill Jazz composer Waldino, The Allure, met with rave reviews from fans and industry alike with their debut album, KISS, reaching number 50 on the Smooth Jazz Charts.

Laura has toured nationally and internationally, and been the supporting act for many outstanding artists including: The Violent Femmes, Keb Mo’, Chris Isaak, Larry Carlton, Norman Brown, Spyro Gyro, Acoustic Alchemy, and Meshell Ndegeocello. She has a publishing company and recording studio in San Francisco where she continues to do select projects for her label, Red Cow Records.

“[Her music is made of] crisp shimmering pop and a honey dipped voice coats every word.” Performing Songwriter Magazine

“[Chandler is] one of the most exciting and important new figures on the scene … and Mapping Territories is one of the best releases of the year!” Music Reviews Quarterly

“Chandler is ready for migration to divaville!” Dirty Linen Magazine

“Allure is one of my favorite words meaning fascination, charm, appeal. All of those words describe this first offering of a musical collaboration that was made in Heaven, which is where this CD, KISS, will take you.” Laurie Cobb, Program Director for MD/APD Jones Radio Network

“KISS, the debut album from the Allure, is a soulful blend of vocal perfection and instrumental excitement that will leave you wanting more!” Sandy Shore, Internet Radio Pioneer, Smoothjazz Global